To share your memory on the wall of Charles Garrett, sign in using one of the following options:

Receive notifications about information and event scheduling for Charles

There are no events scheduled. You can still show your support by sending flowers directly to the family, or planting a memorial tree in memory of Charles H. Garrett Jr..
Plant a Tree

We encourage you to share your most beloved memories of Charles here, so that the family and other loved ones can always see it. You can upload cherished photographs, or share your favorite stories, and can even comment on those shared by others.

Posted Jan 29, 2021 at 11:24am
Those van excursions you took with Mom and Dad for so many years produced so many great stories and memories. Yours and Aunt Nancy's love and caring for Mom after Dad's passing is more of what this world needs. The four of you are now back together once again in a better world. God Bless.
Michael
Comment Share
Share via:
A

Posted Jan 28, 2021 at 10:41pm
While I only knew him for a short time, Mr. Garrett definitely got into my heart. It was always a joy to see him out walking and he was always very friendly and a true gentleman. He loved playing balcony bingo and he would always call me to tell me I did a good job and to thank me for his prizes. I will definitely miss seeing him, but I know I will see him again one day. To his family, I am so sorry for your loss. Praying for God to hold you tightly during this very difficult time.
Comment Share
Share via: 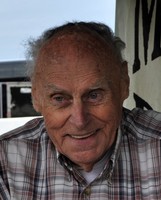