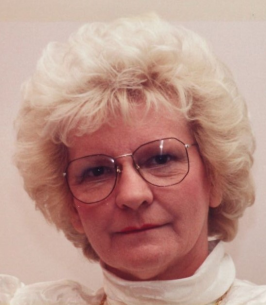 Christina Louise Adams (nee Klein), age 83, of Westminster, Maryland died quietly in her sleep on Saturday, May 14, 2022, at Longview Health and Rehab Center in Manchester, Maryland. She was born August 26, 1938, in Baltimore, Maryland.

Christina Louise was the spouse of Charles Patrick Adams (formerly from Omaha, Nebraska) of 65 years.
After they were married in 1957, they moved to Millard, Nebraska and lived there for several years, prior to returning to Granite, Maryland in 1968. They lived there until 1979, when they moved to Randallstown, Maryland. In 1998, they moved to Westminster, Maryland. Prior to her retiring she was a homemaker, a church secretary at St Alphonsus Catholic Church, the vice president of Key Federal Savings Bank and a pharmacy technician at CVS Pharmacy and was a member of the Liberty/Owings Mills Exchange Club. Throughout her life, she enjoyed spending time with her children, playing with her grandchildren and great grandchildren, reading books, doing word search puzzles, playing bingo, travelling, and doing various arts and crafts.

Christina Louise is preceded in death by her parents Otto Carl and Christina Louisa (Peach) Klein. She is survived in addition to her husband, her children William Patrick Adams and wife Celeste of Westminster, Donald James Adams and wife Pam of Eldersburg, Christina Louise Hoffman and Jim Rowe of Manchester, Patricia Ann Corey and husband Kelly of Hampstead, Mari Kathryn Mueller and husband Charles of Manchester, and Janice Annette Schwing and husband Charlie of Westminster, 18 grandchildren and multiple great grandchildren, as well as her sisters Catherine Camile Perry of Washington State and Mary Evelyn Landsman of Randallstown.

The family will receive friends on Wednesday, May 18, 2022, from 5 to 7pm at Burrier-Queen Funeral Home and Crematory, PA located at 1212 Old West Liberty Road, Winfield, Maryland 21784. A service will follow starting at 7pm with Deacon Mark Ripper of St. John Roman Catholic Church officiating.

Interment will be private at Garrison Forest Veteran’s Cemetery in Owings Mills, Maryland.

Those desiring to make donations in lieu of flowers may contribute to the Parkinson’s Foundation at www.parkinson.org.