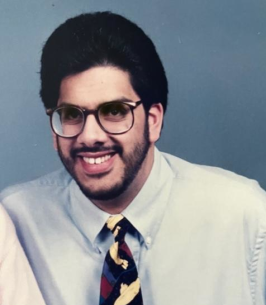 Jason Christopher Thayil, of Boonsboro, MD, died on June 19th, 2022, at Doey’s House in Hagerstown, MD. Jason who was 51, passed away peacefully; and was welcomed into the arms of our Lord, and reunited with his loving parents. Jason was preceded in death by his father the Rev. Ernest Thayil, his mother Margaret Elisha Thayil, his sister-in-law Dominique Bustamante Thayil, niece Athena Thayil, and nephew Anthony Gilberto, Jr.
Jason was born on October 31, 1970, in Seattle, Washington. Jason attended Baltimore City Public Schools and subsequently graduated from City College in 1988. He attended Wesley United Methodist church in Baltimore with his family and was an active member in the youth group, and the choir where he occasionally sang solos in his baritone voice and taught adult Sunday School. Jason traveled to Puerto Rico on a mission trip with the Wesley youth group and participated in the building of a church there. Every summer during his high school years, Jason attended United Methodist Youth Assembly and always looked forward to that week. During the time Jason lived in the Boonsboro/Hagerstown area he worshipped at Hebron Mennonite. As a church member, Jason organized and participated in Disability Sunday on a yearly basis educating others as to the challenges the disabled population often encounter. Disability Sunday was personal to Jason as he himself faced many challenges during his 51 years relating to Cerebral Palsy, Scoliosis, and Hydrocephalus to name a few. Jason faced his disabilities with bravery and courage to the end of his life fortified by his faith.
Jason played the piano and loved Christian music. He has left behind an extensive collection of various Christian artists. One of his favorites was Michael Card. Jason often volunteered at Monocacy Elementary School in Frederick, MD. He received recognition from the State of Maryland Department of Education for Outstanding Volunteer Service.
Jason is survived by his loving family: two sisters, Kathleen Thayil and Amy Bartholomee and husband Wayne, & one brother, Jonathan Thayil, and partner Carrie Willson. He is also survived by nieces Stacy Bartholomee, Allyson Gilberto, Emma Thayil, Ava Batholomee, and nephews Brenden Riley, Julian, and Philippe Bartholomee, Kelman Thayil, and Xaviar Anzulis. In addition, Jason is survived by many loving cousins and extended family members in the US, Canada, Australia, India, and England.
A Celebration of Life will be held for Jason Thayil at a date and time to be determined in late August 2022.
The family would like to recognize the staff at Doey’s House for their outstanding care, kindness, and support of not only Jason, but his grieving family as well.
Donations may be made to Hebron Mennonite or Doey’s House.
Online condolences at www.Burrier-Queen.com.