To share your memory on the wall of Ninita Smith , sign in using one of the following options:

She was born on August 29, 1927 in Ardmore, Pennsylvania, the daughte... Read More
Updated Obituary with Service information

Ninita and Jeff were married for 68 years after meeting at Western Maryland College (now McDaniel), where she was affectionately known as “Barkie.” She graduated with a bachelor’s degree in English, teaching school for several years while Jeff attended law school. Together they had five children, Rev. Jennifer Brooks of Manhasset, New York; Holly Smith-Berry of Fulton, Missouri; Wendy Phillips (and husband, Steve) of Pikesville; Jeffrey B. Smith, Jr. (and wife, Katherine) of Stewartstown, Pennsylvania; and Julie Peatt Cassaday (and husband, Jerry Cassaday) of Westminster. She was “Nini” to ten grandchildren, Jessica, Kelly, Madison, Jamie, Elizabeth, Andrew, Emma, Kevin, Denton, and Megan: and three great-grandchildren, Waverly, Christopher, and Neilson. All survive her.

She was a beloved member of Milford Mill United Methodist Church, serving on committees and developing themes for various programs. Her greatest legacy there was researching and writing an award-winning history of the church’s first fifty years, published in 2003.

Ninita and her family lived in Sudbrook Park, in Pikesville, for more than half a century in a home built in 1895, which the couple named “Tanglewood”; its constant restoration was a labor of love. She tackled much of the redecorating herself—painting, wallpapering, and stripping mahogany stain to reveal the natural beauty of the home’s original oak woodwork. She was a gifted cook and gracious hostess, well-known for her lavish parties (in addition to tens of thousands of nutritious school lunches she lovingly prepared for her children).

She especially enjoyed writing letters, poems, and stories; she documented ancestral histories and dozens of adventures she and Jeff shared (from Cornwall, England to Alaska and points in between), which she self-published as keepsakes for her children and grandchildren.

She and Jeff maintained lifelong friendships with their Western Maryland “gang” of collegiates. They enjoyed watching each other's families grow up and vacationing together at the Delaware shore, not far from Avalon, New Jersey, where Ninita spent summers as a youth and would return many times throughout her life. She loved the ocean.

In 2010, she moved with Jeff to Fairhaven in Sykesville, where she contributed stories for The Inkling literary quarterly, made friends, and enjoyed her cottage with its towering hemlocks, garden, birds, and wildlife—so reminiscent of Tanglewood.

During the last years of her life, she took a keen interest in the lives of her many caregivers and expressed gratitude to each individual for their acts of kindness. Ninita’s generosity of spirit, way with words, easy laugh, and beautiful smile were a blessing to all who knew her.

In lieu of flowers, donations can be made in the memory of both our parents for the 2021 Walk to End Alzheimer's Team Tanglewood online at
http://act.alz.org/goto/teamtanglewood, or by check payable to the Alzheimer's Association and mailed to: Team Tanglewood, 87 Bond Street, Westminster, MD 21157

To send flowers to the family or plant a tree in memory of Ninita Barkman "Nita" Smith (Barkman ), please visit our Heartfelt Sympathies Store.

Receive notifications about information and event scheduling for Ninita

We encourage you to share your most beloved memories of Ninita here, so that the family and other loved ones can always see it. You can upload cherished photographs, or share your favorite stories, and can even comment on those shared by others.

Posted Jan 12, 2021 at 12:54pm
Nita will always have a place in our hearts. She was a wonderful woman. She and Jeff were great friends. We will never forget the many vacations we shared overseas and at bar conversations, the children’s weddings and just getting together for meals and drinks. She will be missed. Love Carol and Glenn Bell
Comment Share
Share via:
TF

Love you guys! You are part of her family 🙏🏻
M

Posted Jan 08, 2021 at 10:36am
Dear Lord, Today I ask you to help Juile and her family. I ask you to be with them while they struggle in the darkness of grief. May they recognise joy in the memories, hope in your love, and peace in the pain. May you walk beside them in their journey to recovery, filling the void and emptiness with your presence. Amen
Comment Share
Share via:

Posted Jan 07, 2021 at 12:37pm
My name is Jennifer Tettey I was one her lovely caregivers. Nini was a sweetheart 💕 and a wonderful lady. She and I looked forward to church every Sunday and also lunch time. I used to sing and dance with her. She will be truly missed.Love you Nini

Thank you so much Jennifer, for always being there to take care of my Nini.

Awwww Jennifer those were special times for mama. Thank you for your love and care 🙏🏻 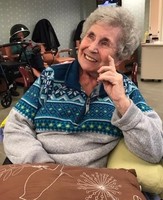 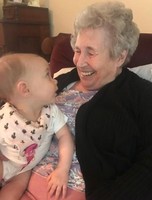