To share your memory on the wall of Norwood Griffin, sign in using one of the following options:

Leaving his work on a farm at the age of eighteen, he began active duty in the United States Army and served therein from 1943 to 1946. During that time, he bravely fought in the European Theater of World War II, seeing combat in the Rome-Arno Campaign, the Rhineland Offensive, and the Central Europe Campaign. For a brief time, he was captured by German forces as a prisoner of war until he, and fellow soldiers, successfully escaped and rejoined U.S. Army forces.

After the end of the war and his honorable discharge from the military, he returned home and married Gladys Griffin, née Eisner. In 1954, he opened Griffin’s Crown Service Station, a gas station and automotive repair business on Liberty Road in Randallstown that, sixty-seven years later, is still in operation. Griffin’s Crown later changed names to Griffin’s Arco and then to Griffin’s Shell. Today, the residents of Randallstown and neighboring communities recognize the venerable and longstanding Griffin’s Service Center on the corner of Liberty Road and Brenbrook Drive, where Norwood Griffin’s sons, grandchildren, and great-grandchildren continue his goal of serving the community.

He was a lover of cars and racing, both driving and spectating. His love for travel took him on road trips to the farthest reaches of the United States, from the cold mountains of Alaska to the sunny shores of Florida. In his spare time, he enjoyed cutting down trees and splitting firewood for his family, an activity that he continued well into his nineties. He taught those around him, through both word and deed, the value and importance of hard work and love for family. Through Norwood Griffin, our gracious Lord Jesus Christ has blessed generation after generation of family, friends, and neighbors. May a hundred years from now, his descendants still remember his name and praise God for him.

Devoted husband. Loving father. Friend and neighbor to all. He was truly of The Greatest Generation.

Receive notifications about information and event scheduling for Norwood

There are no events scheduled. You can still show your support by sending flowers directly to the family, or planting a memorial tree in memory of Norwood Glenn "Griff" Griffin.
Plant a Tree

We encourage you to share your most beloved memories of Norwood here, so that the family and other loved ones can always see it. You can upload cherished photographs, or share your favorite stories, and can even comment on those shared by others.

Posted Mar 08, 2021 at 03:40pm
My dad and I (George Hladky) lived next door to Griff for a few years in the Ockenfels house. He always had the brightest smile and we loved talking !

Posted Feb 28, 2021 at 06:19pm
My sincere condolences to the Griffin Family, Stanley, Rita, Doug, and Gary. I am thankful to have had the opportunity to work for “Boss” in my teen years . It was a experience that Boss and the Griffin family allowed me to learn responsibilities and open the gateway for the working field in life. Boss was a character, he was caring and a fair man. He operated a genuine honest business and treated everyone fairly. I learned so much from working for Boss and the Griffin family. I still remember Boss giving money every Friday just before closing and saying Ho Che, Run across to Ginos and get my bucket of chicken. Not sure if Boss was supposed to be doing that, but it was a routine. He will be greatly missed. Rest In Peace Griff
Comment Share
Share via:
AT

Posted Feb 26, 2021 at 05:24pm
I have fond memories of "Mr Griff", and being with my father, Nathan (Natie) Tucker, spending time at the station, as Dad always had his hands in an engine. As the youngest of four I accompanied him often. From the Tucker children please accept our deepest sympathies on this loss.

Posted Feb 26, 2021 at 11:52am
I worked for Mr. Griff as a young man. I always enjoyed this, and time has shown me what a unique experience I was so lucky to have had. Mr. Griff always had a tidbit of advice, which at the time may have seemed trivial, but again, through the lens of time, has proven so valuable. He often said "The customer is always right" and occasionally mumbled "even when they're not" -- Such a lesson in dealing with the public. On payday, he'd offer his advice "It's not what you make, it's what you save." At the time, that seemed so basic, but again time has demonstrated the value of such advice given early in life. It's hard to imagine how different we all might be today if we'd never crossed paths with Mr. Griff's giant presence, but I am quite certain I would be lesser without having done so.
Comment Share
Share via: 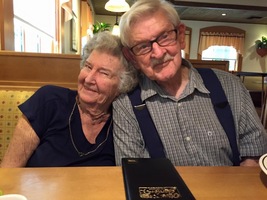